Cocktails made with scotch whisky are not that unusual, but the general opinion is that whisky is too flavourful a drink to mix well with others, and should be enjoyed by itself. That might be the case for many single malts, which have such a unique flavour profile that it is hard to see them sitting well with any other flavours in a glass (the exception being such modern drinks as the Penicillin, which features Laphroaig), but blends have been designed to have a consistent, if less characterful flavour. They then lend themselves to mixed drinks better than the unique single malts; part of this comes from the combination of more neutral grain spirits, mixed with some malt whiskies, to produce the blend’s own flavour.

The Rob Roy can be seen as a Manhattan made with whisky, but the smokiness and slightly less sweet nature of scotch produces a quite different drink which stands in its own right. Like the Manhattan, a Rob Roy can be ordered dry (with only dry vermouth), perfect (a mixture of dry and sweet vermouths), though the standard drink is made with sweet only. The result is a rich, smoky cocktail, with a touch of herbal & wine-y flavours from the vermouth. One element that must not be overlooked is the presence of bitters. As per the Manhattan, the usual bottle to reach for would be the Angosturas, but I think that something with a more citrus flavour suits this drink better, and as I was mixing my version from the recipe in Parson’s Bitters book I followed his advice: I made my drink with Peychaud’s bitters, although Fee’s Orange would also be a good choice. Garnish follows the Manhattan route: cherry for the sweet version, lemon peel for the dry/perfect variants; I used a lemon peel in my straight Rob Roy: it seemed to me the lemon flavour cut through the sweetness slightly better.

2ozs of scotch whisky (Grant’s in this version)

Stir in your mixing glass, over ice, until well chilled. Strain into the Martini glass, and garnish with either lemon peel or cherry, to your choice.

History notes: There’s not much debate to the story behind this one: in 1894, the barman at the Waldorf Astoria Hotel was asked to create a cocktail to mark the opening of Rob Roy, an operetta written by Smith & De Koven; the barman mixed a Manhattan with scotch whisky, and named it for the hero of the piece. The operetta seems to be lost in past, but the cocktail recipe lives on.

Following the disappointment with the Aviation earlier (too harsh, too acidic), I remembered another classic, lemon juice-based drink: the Sidecar. But, unlike the Aviation, this recipe is perfectly balanced, with proportions of one sour (the juice), one sweet (Triple Sec) & two strong (Brandy or Cognac). Shaken rapidly over ice, then strained into a cooled glass, the drink has a sharp and refreshing hit followed by a warming glow from the two alcohols. The combination of the two fruits, lemon & orange, are really well matched. I used the proportions as laid out in Tristan Stephenson‘s book, the Curious Bartender, in a classic 1:1:2 combination. Made like this, the drink comes out as a sophisticated relative to the Margarita.

Shake well in a shaker over cubed ice, then strain into the Martini glass. Without garnish is the traditional way to serve the drink. 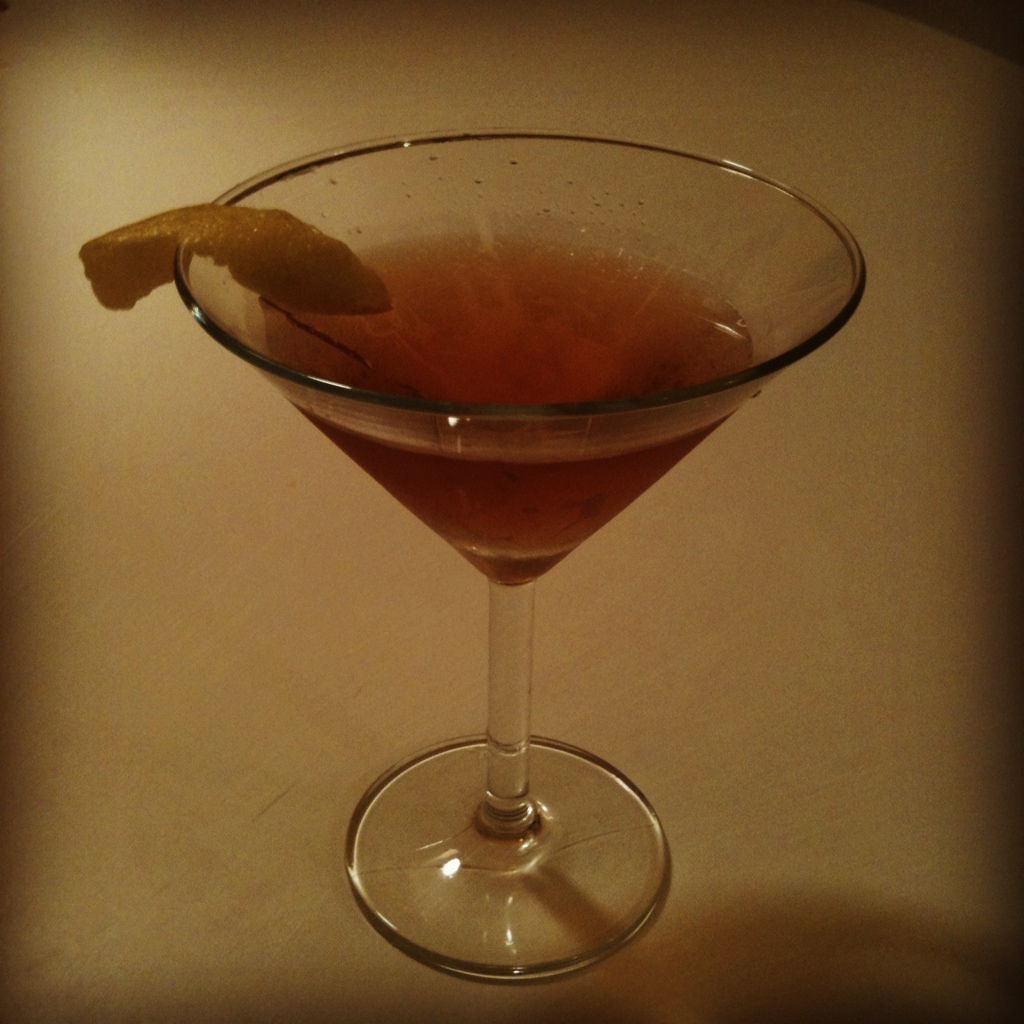 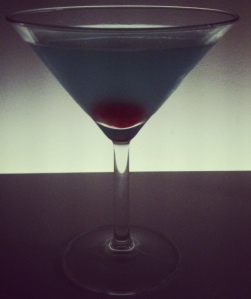 The Aviation is a cocktail I had wanted to try making for a while; I liked the delicate blue colour it always seems to have, and the rather unusual collection of ingredients (gin, lemon juice, maraschino & creme de violette – although the last seems to be optional in many recipes).

The recipe is a variation on a sour – the gin is given a kick with the addition of lemon juice, sweetened with the maraschino liqueur and given a little colour and flavour by the dash(es) of Creme de Violette.

Method: Put all ingredients into a shaker with ice & shake vigorously until well chilled. Strain into Martini glass & garnish with a single cherry (or, alternatively, a slice of lemon peel; flamed, if liked – presumably representing a ‘downed aviator’…).

I wasn’t taken by the results of this at all, which was a surprise. The proportions here create a drink with too acidic an attack from the lemon juice, which seems to linger in the back of the throat. I think the proportions are wrong, and would switch the amounts of maraschino & lemon juice around. But the drink is undeniably a pretty one, and may well appeal to Cosmopolitan drinkers who want something in a similar style, but less sweet. Classic recipes leave out the creme de violette, but it certainly gives the drink an attractive colour and an unusual flavour. It is worth tracking down.

Recipe notes: The sour base of this cocktail means that it features in quite a few variants. For example, drop the creme de violette in favour of a few drops of orange bitters, and this cocktail becomes a Casino.

Historical notes: The cocktail was invented by Hugo Esslin in New York, whilst working at the Hotel Wallick, and first recorded in his book, Recipes for Mixed Drinks in 1916. My facsimile copy of Craddock’s Savoy Cocktail Guide from the 1930s, includes the recipe, but as noted before, lacks the creme de violette. 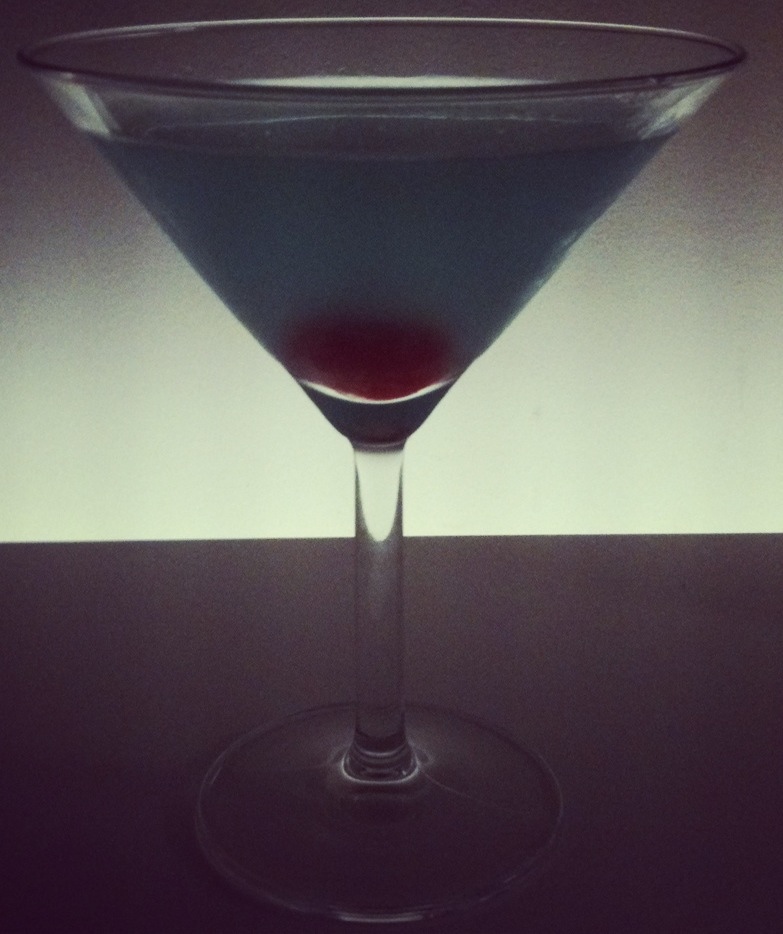 One of the oldest cocktail recipes, the Sazerac is very simple: rye, sugar, Absinthe & Peychaud’s bitters. The bitters are very important here: it has to be Peychaud’s, otherwise you are not making a Sazerac. The correct recipe uses a large slice of lemon peel. Tonight, I am out of lemons, so have substituted a slice of orange peel; I quite like this, and find the flavours more mellow, and very similar to an Old-Fashioned. The lemon gives the drink more zip, but this evening I prefer it this way.

1 jigger of rye (Canadian Club in this version)

1 small sugar cube or a pony of simple syrup

Chill the glass. Muddle the sugar cube with the Extreme d’Absente bitters (if you are using regular Absinthe, then rinse the chilled glass with a few drops of the Absinthe and drain) in your mixing glass.  Stir the whiskey together with the Peychaud’s bitters and ice into the sugar mix and strain into the chilled Old Fashioned glass. Garnish with a large slice of lemon peel (or orange, depending on the state of your fruit bowl).

Update: I forgot to credit the redoubtable legendary barman, Brian Silva, for making the first Sazerac I tasted when he ran the cocktail bar at Rules Restaurant. He noticed I had been drinking a Manhattan previously, and suggested I might like to try the Sazerac as an alternative. He mixed it the ‘correct’ way – chilling the glass with ice, then rinsing it with a quantity of Absinthe, before building the rest of the drink. The results were sublime.

Further update: Brian Silva now runs the bar at Balthazar in London, and has written a book, which is highly recommended. You can read about his excellent career in an article in the Rake magazine. 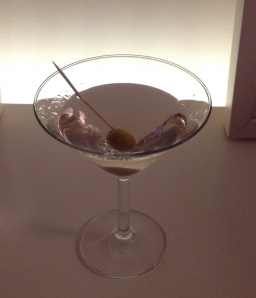 Although I still think the Manhattan is my favourite cocktail, the close second has to be an ice-cold Martini. There is something about the sparseness of the ingredients and the purity in presentation that makes this a very elegant drink that delivers its alcohol kick with a degree of precision few drinks can match.

I have seen opinions that state that Bombay Sapphire is too floral or delicate for a Martini, and that drier, more robust gins, such as Tanqueray or Gordon’s are necessary. I don’t agree, but perhaps my view is slightly skewed by my bottle of Sapphire being an export-strength version, found in Malaysia. The extra alcohol perhaps counteracts the floral notes of their recipe; either way, I find it makes for a very crisp and refreshing Martini. Exactly what one looks for in this drink I think.

One other small note: whatever you do, don’t omit the bitters. A few drops of something to add an extra dimension of flavour is really effective in this drink. Traditionally, a citrus-style bitters is recommended, like Fee’s Orange. This time, I used my batch of Brad Parson’s BTP bitters that I made last month. The sour cherry notes of those bitters worked really well here.

Update: another cause for debate here is the quantity of vermouth. I really don’t believe that refracting the light through a vermouth bottle into the shaker works, neither Noël Coward’s trick of nodding in the direction of Italy nor Churchill’s of looking in the direction of the vermouth bottle gives the required results. By all means, add smaller or larger quantities of vermouth, but it has to be there; otherwise you are just drinking a glass of gin with an olive in it. That is not a cocktail. And it is the flavouring of the vermouth that modifies the gin into the Martini.

I stir my Martinis; for a debate on them whys and wherefores of the stirred/shaken debate, please take a look at my earlier post here. I just think the lack of ice shards in the drink, and the clarity of the liquid that results from a careful stirring gives for a better end result.

The method is similar to the Vodka Martini I made earlier:

Stir vermouth together with ice in a Boston shaker jar and tip away around half the vermouth.  Add the gin, drops of bitters & stir again. Pour into a chilled Martini glass & garnish with a green olive, stone-in.

All of the posts

Where to find me